The Rise and Fall and Rise Again of Steveston

When W.H. Steves purchased land in 1886 and began laying out Steveston, he imagined a town that would rival Vancouver. Canneries, shops, farms, and homes were established. People came from around the world to put down roots and the town flourished from the 1890s to the 1910s.

Then boom led to bust. A decline in the salmon industry from 1913 onwards, a devastating fire in 1918 and the Great Depression in the 1930s meant years of hardship. In 1942, Steveston also lost more than half its population and many businesses when people of Japanese descent were interned.

Throughout it all, the town survived to rise again. Today, Steveston is a destination renowned for its village atmosphere, waterfront beauty, and strong connection to its heritage.

Fishing the Mouth of the Fraser

Steveston's location at the mouth of the mighty Fraser River is a great place for salmon fishing. First Nations people up and down the coast and along the River's shores knew this and came here each year to set up camps during the summer to fish for salmon, sturgeon, and other fish.

For thousands of years, First Nations relied on these rich fishing grounds to support their communities. As European settlers began to establish farms and canneries, First Nations camps became a thing of the past. However, First Nations people continued to live and work in Steveston as part of the growing fishing industry.

Tall ships came to Steveston to load tins of fish destined for international markets. During this time, people came from around the world and Steveston grew with a mix of cultural influences. 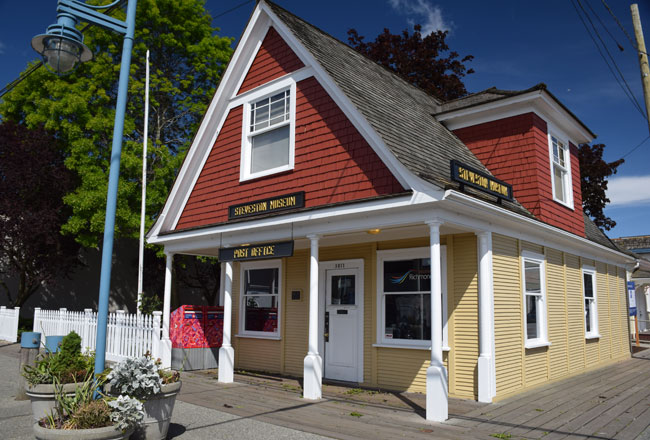 Built during Steveston's boom days, this building was the area's first bank. It opened as a Northern Bank in 1905 before operating as a branch for the Royal Bank of Canada for almost 50 years. Purchased from the B.C Mills catalogue and shipped down the Fraser River from New Westminster, the building was assembled on site.

From 1966, Dr. James Campbell had his medical practice here until he sold the building in 1977. Since then, the building has been operated by the Steveston Historical Society and the City of Richmond.

Today, the museum, visitor centre, and post office is surrounded by traditional wooden boardwalks and filled with captivating exhibits about life in Steveston village.

A short walk north along No. 1 Road would have once brought you to a 30-bed hospital, built in 1900 by the Japanese Fishermen's Benevolent Society.

This building served as an administration office for both the hospital and Japanese School next door.

Moved onto the Steveston Museum site from its original location in 2010 and opened in 2015, today it houses exhibits on Steveston's Japanese Canadian community.

Explore Nikkei Stories, a 10 part video series on the audio-video kiosk and reveal stories of struggle and triumph within Steveston's Japanese Canadian community.

This building's architecture is inspired by the Steveston Station that once stood onsite. The original Canadian Pacific Railway tracks built in 1902 run through the building, creating a fascinating heritage feature.

Between 1905 and 1958, these tracks carried B.C. Electric Railway Company interurban trams between Vancouver and Steveston via Marpole. This line was part of an extensive network of streetcars in Vancouver and Interurbans that ran all the way to New Westminster and Chilliwack.

Today this building houses the Interurban Tram Car 1220, which was built in St. Louis in 1912. It is the largest artefact in the Richmond Museum's collection and one of only seven surviving Interurban trams.

Built in 1894, and nicknamed the "Monster Cannery", this was once the largest of Steveston's 15 canneries and one of the biggest in British Columbia.

Originally a salmon cannery until canning operations came to a halt during the Great Depression of the 1930s, the site continued to operate as a raw fish station and net loft until the 1940s. During World War II, herring was canned here to send overseas to Allied soldiers. Later, the cannery operated as a herring reduction plant until it closed in 1979.

The site was declared a national historic site in 1976 and is now a museum presenting the history of the West Coast fishing industry, operated by the Gulf of Georgia Cannery Society on behalf of Parks Canada.

Once a multicultural community built on pilings and connected by boardwalks, these diverse historic buildings explore the history of wooden boat building and living conditions on the waterfront.

Built in 1889, the Britannia Cannery operated operated a single canning line until 1917. As a result of the rockslides at Hell's Gate four years earlier, many canneries were forced to close or were converted to other uses. The Britannia site served as a shipyard and maritime repair shop until 1979.

Declared a national historic site in 1991, the remaining buildings illustrate the industrial activities and living arrangements of a typical Steveston cannery and shipyard of the early 1900s. Exhibits feature stories of the hardships and hope experienced by the multicultural workforce.

Completed in the late 1890s, this historic farmhouse was home to two generations of the London family. Charles and his brother, William, arrived from Ontario in 1877. They purchased 200 acres and began to clear the land for farming. Charles married Henrietta Dalzeil in 1888 and raised their family of five here.

Their eldest daughter, Lucy, and her husband, Herbert Howse, also raised their family here until 1948. It was bought by the City of Richmond in 1978.

The farmhouse reopened in 1983 after extensive restoration. It now serves as a museum that depicts pioneer life in Richmond at the turn of the century. The farm is also home to heritage perennial gardens, historic farm equipment and the Spragg family barn.